Ultrasound emissions are sound waves that have a frequency greater than 20 KHz.

Consequently the ultrasound field generated by the piezoelectric ceramic disc makes the molecules in the sound field vibrate and oscillate.

In addition to thermal changes, the vibration of molecules generates also mechanical effects within biological tissues, which are generally considered to be non-thermal in nature. These effects include mechanical vibration, cavitation, acoustical streaming and microstreaming. 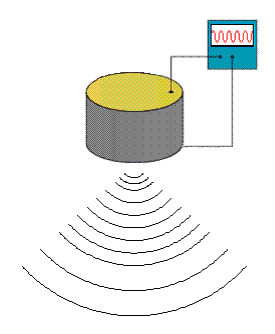 Therapeutic ultrasound frequencies are traditionally between 1 MHz and 3 MHz.

When comparing EQ Pro Therapy emission (38 kHz +/-2) to the one of traditional high frequency therapeutic ultrasounds (1-3MHz), penetration is one of the biggest differences, since the effects of high frequency ultrasounds are much more superficial, being readily absorbed by superficial tissues.

It is suggested that due to its lower frequency (38 kHz +/-2) and therefore greater wavelength (longwave), EQultrasound Pro Therapy emissions will penetrate further into the tissues and thus ‘reach’ deeper targets and have effects that traditional high frequency ultrasound is unable to achieve.

Ultrasound intensity is measured in watts per square centimeter (W/cm2) and describes how strong the power output is. The greater the intensity, the greater the thermal and mechanical effects generated by the ultrasound emission.

It is important to note that ultrasound emission of high frequency 1-3 MHz devices will affect just superficial tissues, unless the intensity of the applied ultrasound is significantly increased in terms of W/cm2, but this can lead to burns and “hot spots” that might cause severe tissue damage.

EQ Pro Therapy produces positive results in the treatment of several equine soft tissue and musculoskeletal conditions. For example the EQultrasound Pro promotes the repair of deep tissue lesions, such as tendon injuries and ligament lesions. Experimental evidence indicates that ultrasound can increase the rate of protein synthesis by fibroblasts. The movement of ions such as calcium effects cellular activity, increasing the rate of phagocytosis and repair.